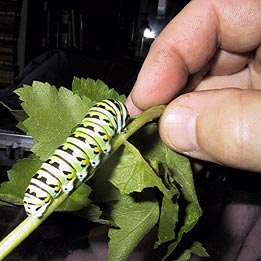 I took a picture of this black swallowtail caterpillar a few days before it formed a chrysalis. It seemed to get extraordinarily large for its species. Those are Stan's fingers. It formed a brown chrysalis, only one of two brown ones we've had so far this season...most have been green. My theory is that they tend to form brown chrysalises at the end of the season because those will camouflage into dead plant matter better, whereas the green ones are formed earlier in the season to camo into green/living plant matter. This is just my amateur, non-insectologist, artistic observation...what do I know? I've been observing these guys for a couple years now. The ones we overwintered were all brown.

There's a Norwegian Song Artist called Morten Abel. He has done a really nice (I think) song that's called: "Tulips in my head"
Goes like this:
"I'm collecting butterflies, every color every size. I keep them in a glass jar, so that I know where they are. And this one is the Silver Queen.........."
For some reason I allways think of you, Ann, when I hear that song :) I'm thinking about sending you that one...