It's a bit hard to explain, but since I've really started getting into cactii and succulents, it's another world as far as plant ownership. The difference between regular tropical houseplants (the leafy kind) and cactii/succulents is like the difference between owning tropical fish and owning dogs. Tropical fish and houseplants are colorful and pretty and all, but cactii have much more personality--like dogs. Their solitary columnar or globular forms make them seem like little characters...tall little people, stubby little people.

I am attempting an experiment this season--I will not eat any chocolate until next summer. Why? Facial breakout. I suspect chocolate is a big culprit, and in the winter months there is so much chocolate around, beginning with Halloween. This Halloween (we got like 6 kids total so there was plenty left over...kids too spoiled to climb our 22 steps or something) I substituted caramel and hard candy for chocolate. And you know what? I'm not missing it. Sure I love chocolate, who doesn't? But it is not necessary...it really isn't. And this might be rather mean of me--of course it's mean of me, everything I say is mean because Ann IS mean because she's not into teddy bears and smiley happy nice things--I rather ENJOY being able to do without something that most women cannot. I mean I KNOW I can do without all the superficial frippery and adornments and girly indulgences that women--*other* women--find life sustaining that is in actuality completely irrelevant...but that's just the physical world. Chocolate is nourishment for the body and soul. And I don't need it. I like the concept of being an ascetic, I suppose. Yet I am digressing. If I still break out this winter, then I'll know it's winter itself...lack of light (my face was really clear when I was in Colorado and getting lots of sun), and not the chocolate. But I have to know. To me a season without chocolate is certainly worth that knowledge.

So I thought of a substitute for people like me, for people who love getting those heart-shaped boxes every Valentine's day filled with chocolate candies...a heart shaped box (deeper, of course) filled with little tiny bon-bon-shaped cactii! As was said in a Seinfeld episode, albeit in sarcasm, "Nothing Says I Love You Like a Cactus!" See, to me, a cactus really does say "I Love You." Unfortunately, I don't know if other people can see it like that. They'd prefer to stick to their silly pastel teddy bears and lame cut flowers that die in two weeks. (I hate cut flowers unless they're from my own garden--what a waste of cash!) Give me cactii!

Unfortunately, since our cactus obsession has taken over, there probably aren't too many species available on the common greenhouse circuit that we don't have. But I still think the concept of a heart-shaped box filled with tiny young cactii (and clumping-type succulents too) an ingenious one. It's not something you'll consume in a month either. It's a gift that keeps growing. The one drawback is that it would have to be fairly expensive because it would have to be packaged in a "loving", elaborate way, nice little decorative painted terra-cotta pots, a lovely devorative keepsake heart-shaped box, to keep out the hate-gift factor...you know, sending your ex- a box of cactii is a sure way to tell a cactus-hating prissy girl to piss off. So there could be two different product lines..."Nothing Says I Love You Like A Cactus" could be for people like me...and the "Nothing Says ___(you fill in the blank) Like a Cactus" could be composed of nothing but dead cactii...the poor unfortunates that didn't make it. That way, no cactii would potentially be harmed in the giving of these gifts.

Another line of cactus gifts Stan and I were contemplating recently were those cactus bowls...you know, you see them at some florists and greenhouses...shallow bowls with painted western scenes filled with assorted cactii and a few dumb rocks. Stan calls them "an ecological disaster waiting to happen." What he means by that is that whoever assembles the bowls has no idea that all those different cactii have different climate requirements. Some need cool (nearly freezing) winter temperatures to bloom. Others will perish if the temperature gets below 60°F! So Stan thought that if the bowls are filled with similar-climated species, you could keep them in the appropriate spot in your house, garden or greenhouse. And my contribution to this concept? They would be called names of western states or countries and appropriately decorated. The Colorado bowl would contain cold-climated species (that you could keep on a 3-season porch in the winter); the bowl would be painted with mountain scenes and the soil would be adorned with beautiful quartz crystals. The Mexico bowl would be warm-climated, which means you would keep it inside in the winter (unless you live in the sun belt, of course). It would be painted with Aztec decorations and the soil would contain pieces of turquoise. The California bowl would be adorned with seashells and have ocean scenes on the bowls. I think this is rather clever, and certainly beats the current products on the market as far as keeping the plants alive, visual aesthetics and even "gift appeal."

Below are the first Euphorbias we got. Although they look like cactii...they're not. They're succulents. The first one, Euphorbia meloformis, we found at a greenhouse in Salida, Colorado. It was just so unusual, unlike anything else I've ever seen (or at least noticed). I nicknamed it "Silly Buttons" which is also my nickname for Lucifer Sam. The second one is similar, Euphorbia ferox. We found it in a greenhouse in Cortez, Colorado. We've since repotted them in nice terra cotta. One thing I liked about the greenhouses in Colorado is that they seemed really conscientious about including the Latin name on a little white plastic tag. I like that. You won't find that out here...people in Wisconsin aren't really into cactii. 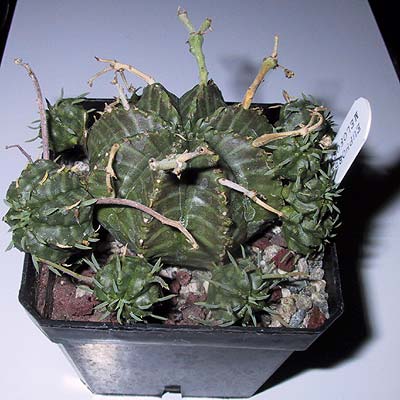 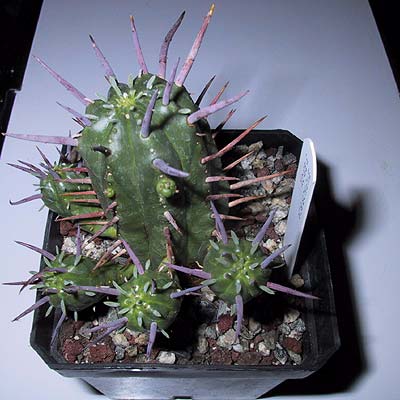 I'm impressed that all though cats and cactuses live in the same house, nobody gets hurt ;)

Really sharp cactii could poke out a pug's eye, so we're careful with those around Lucifer Sam. He sees very well for a pug...he's not as bug-eyed and blind as Hieronymus was, so it's more like his puppy spasticity would get him in trouble rather than his fumbling Mr. Magoo-ness and protruding eyes. But we don't keep cacti on the floor for that reason. And in the summer when we put them outside, we put the really sharp ones in spots where he can't get to them.