Click the images to see a closeup of Lucifer Sam 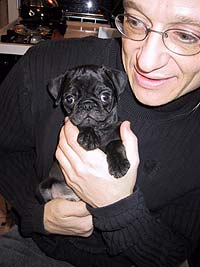 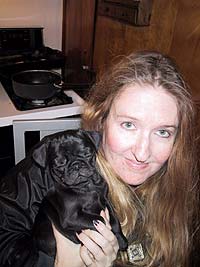 Yesterday we took Lucifer Sam to the Vet's. We got quite the response from all of the vets, technicians and reception people there. Everyone had to hold him, and Stan and I were the envy of them all as their "ooooohhhh!"s registered off the scale on the puppy lust-o-meter. I felt like the luckiest person alive to be the owner of such an adorable puggy. As one of the vet techs said, referring to Lucifer, "you know it's really bad when you want to marry him."

Plato is very jealous. It's not good. I try to divide my attention between them, but I can tell Plato is mad at me, and even snubs me. I'm not letting them play together yet...LS is just too small to be around such a spaz as Plato. 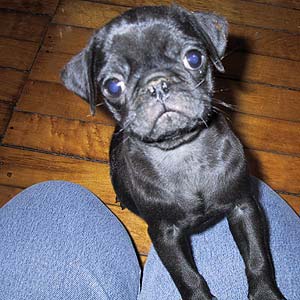 Not much sleep...got new puppy last night. Long story, kept him AND Plato in the room with us (kennelled separately) or else Plato would bark his head off upstairs.

Lucifer Sam was a Pink Floyd/Syd Barrett song about a cat, but considering this little guy was born January 5, one day before Syd's birthday, we decided to name him after something Syd-like, and well, Seamus was Floyd post-Syd and more befitting of a hound ("We should name a cat Seamus" said Stan). And being an all black pug, the name Lucifer is quite appropriate. And it was a general consensus with Stan and I that we would name him something Floydian, which marks a change from our usual pet names with a basis in antiquity (Plato, Caligula), myth (Persephone), old art (Hieronymus [Bosch]), or bloodthirsty rulers (Caligula, Vladimir). I guess Natasha was the only animal that could also have had a "modern" name origin, that being the Jay Ward cartoon of Rocky and Bullwinkle's wicked adversary communist dominatrix femme fatale (friend/lover of Boris....back in '85, Boris was our short-lived iguana).

Can't remember. Woke up yelling something...about a..."license"? Not really sure. Woke Stan up, I think he thought I said "lizard" because then he starts babbling about lizards. Isn't it twisted how you communicate with people when you're both half asleep?

1.) I was in a high school and heard that after a certain hour, a part of the school would be closed off, which was the area where I had my locker. I was running down a set of stairs to get to that area. There was a huge sliding glass door that was blocking it off, but I was able to slide the door open and sneak into that hallway. I was standing at my locker when this toad-shaped administrator/teacher (who looked like someone from my high school, I think, complete with cheesey plaid sports jacket) told me I had to leave. I yell out in my sleep "but you don't understand!!!" waking me and Stan up.

2.) I had to pick up some of my art that was in a show at the Methodist Church in Fort Collins (!!!???yeesh). There was a young woman who was supposed to take me to the room where they were storing the art. I followed her all around the church, up and down many flights of stairs (it looked a lot like a library), through rooms, and finally I couldn't follow her anymore because she was walking too fast for me. Then I just stayed by a flight of stairs, hoping she would find me. I think she eventually did, and told me that she couldn't find any art . I asked her what was I supposed to do about it, that I want my art back. I can't remember how it ended.

3.) I was walking with some people...Stan? My parents? down Pitkin Street near Whedbee and Smith, heading toward my parent's house. We had dogs with us, the pugs that we're going to look at tomorrow. The male was quite a bit larger than a pug and it had whitish-hairs poking out of its fur. I looked at it again and it looked more like an English Sheepdog than a pug.