I have high blood pressure.

What happened to the times when I was in my 20s and they'd have to take my blood pressure twice, not because they got a strangely high reading, but because THEY COULDN'T EVEN GET a reading?

Why does my dad, who is always so tense, has NO BLOOD PRESSURE, whereas my mom who is pretty mellow has high blood pressure? Why did I have to inherit that from her? Of all the things I wish I got from my dad...

Thought I'd use this space to show off some of my latest creations...

...since I'm pretty tired of writing.

Fluorite Necklace. It's not amethyst. 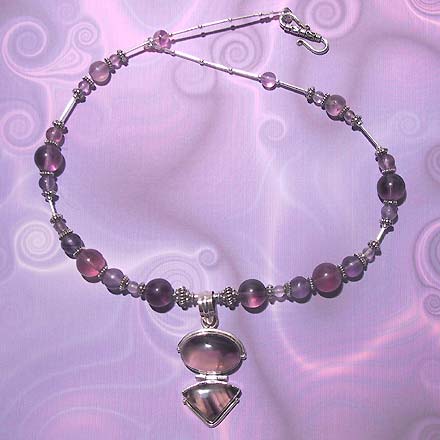 This is way too funny...

I've been sick. Bad cold. Doesn't want to go away. I feel it in my chest, and my head is still stuffed up. I feel stupid. Being sick makes me feel stupid, or rather, very non-left-brain. I'm fine working on my jewelry, I can do as much of that as I have energy. But when it comes to thinking more left brain, i.e., planning things out, corresponding with clients, doing clients work, I cannot do it. I'm a vegetable.

We were supposed to see Tim this past weekend, but we called to cancel because I was awfully sick. Turns out, his parents were coming up to see him anyway. This is so Seinfeldian: 'But we had PLANS! And he just saw his parents a couple weeks ago over Easter...he hasn't seen us since...March!' 'Yes, but you were sick!' 'But he didn't know I was sick when he made plans with his parents!'

Everything in life reduces down to a Pink Floyd song, a Seinfeld situation, or possibly a Twin Peaks scene, or maybe a Clint Eastwood movie...or Fargo...or Pulp Fiction. This is the meaning of life.

Latest scoop on the explosion is that they can't find any cause of it as far as faulty gas lines or anything. I heard they are now considering it intentional. Made me wonder when I read the guy was bipolar...did he try and commit suicide? I mean intentional could mean aything. It could mean he suspected there was something wrong with the furnace, went downstairs, did something stupid in an attempt to fix it, and blew himself up. Intentional could also mean he wanted to blow himself up. This makes me incredibly, incredibly sad. I wonder if we will ever know what really happened. I wonder if they will find a note in all that rubble.

And so here's a little controversy, perhaps I can get The Stan to debate me here: The TAs on campus are striking. Seems as if they don't want to pay $9/month for their health care which is now free. I say they are being incredibly petty. $9/month per health care?!? Who gets healthcare for $9/month? They say their wages are so low that they should get this benefit free. Oh please. Low wages? Try getting a job in the community. Now, I believe we all should have universal health care, you'll get no debate from me over that. But the cost of universal health care would be a lot more per person than $9/month. Just try finding a job in the community that pays you $12,000/year for 9 months of work (summers off) with free healthcare. Just try and find it TAs. You are making a mockery of what unions stood for when they were first organized in the early part of this century.

Yeah, I'm bitter as someone who never got a TA and had to deal with the privileged, entitled attitude of TAs who were too good to have anything but their precious little teaching position ('if I don't get a TA, I can't continue on with graduate school').

I feel bad for the undergrad students who are taught by TAs and have spent all that tuition to have their semester interrupted by this act of selfish entitlement. And they number more than the TAs.