I'm just a tad excited and can't concentrate on things.

Stan's half sister on his dad's side is coming to see us today. She had a bead show she was going to see in Milwaukee (she's a beader) and will stop by Madison this afternoon. We've never met her in person before...the only sister we have left to meet. Still two half-brothers on his mom's side that hopefully we can meet this fall.

This whole family thing and relatives is an alien concept to me. I prefer my animals and plants...they're my family. I find it easier to talk to them too. [more]

But with two Stans, it'd be confusing

Thanks to Eric who started a bunch of people doing this (who actually got the link from other people himself), I was able to make South Park kids out of me and Stan. The doped-up-on-Wellbutrin guy who's trying to quit smoking is our friend Tim. Well, it's not really him...it's a South Park likeness. And he'd hate me for saying this, but he's actually balder on top. And Stan actually has *more* hair. And my forehead is higher...and...and...

I watched another defyingly popular, overly sentimental latter-day Hollywood movie that everyone but Stan and I saw before, on cable again last night: "Sleepless in Seattle." Although not utterly boring like "The Bill Chill," I still had a problem with it...not just the fact that it had a totally implausible plotline especially regarding the matchmaking kid taking a plane to New York by himself, but the fact that the Meg Ryan character leaves her boyfriend/fiancee for some guy she hears on a stupid call-in talk show. I mean, what the? When I started watching it, I was thinking, "OK, this boyfriend guy is either going to die or end up being a total cheating schmuck" which will cause Meg to meet Tom Hanks (I forgot the characters' names). But no...they were perfectly compatible...unless I missed something. What the heck kind of message is this sending? "Go for it, girls!" Puhlease. And she was a stalker! Stalking a voice she hears on a talk show three thousand miles across the country! I guess that's why they chose someone benign like Meg Ryan for the part than say...Glen Close. That way it doesn't seem like stalking. It's just scoping him out. Yeah. Right.

I still can't believe what the public cheerily eats up, lauds with praise, and doesn't question. No wonder why our society is so screwed up.

I went out to eat lunch with a female friend/acquaintance that I made up for the dream (I have no clue who she was). It was a very expensive restaurant and we ordered some sushi items...like a couple sashimi plates for $29.95 each, and some sort of fancy sushi salmon thing for $75 each, plus she ordered an expensive bottle of wine. She said she would get the bill, but when it came, the total was something like $487.00. I couldn't figure out, although the items were expensive, how they totalled to be that much. She freaked out at the price so I volunteered to pay for part of it. Ugh.

We had a pet rat running around on our bed. It was really sweet...white and brindle colored. I was afraid to pet it because I'm extremely allergic for them. Then I noticed that we had one of those 1970s tubular gerbil cages for the rats, but there were four rats, one medium sized and three very large. I was disturbed because it seemed too cramped for all of them. Then I was packing up a bunch of makeup and toiletries because I was going on a trip. 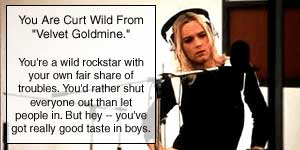 But of course...had I been any other Ewan McGregor, I would've worried! It's just my most favorite movie.

DREAM creeped me out

I dreamt that Stan and I were at my grandparent's house*. They were still alive. They weren't that old, even, like maybe just a little older than my parents. My grandmother was talking non-stop, as my mom, her daughter-in-law, always said she did. She and my grandfather and Stan were in the living room having a conversation. I wanted to go in there with them, but I knew I wouldn't be able to get a word in edgewise (as my dad always complained of). Finally I went in there with my iBook and started working on something. Then she said something like, 'ooh, let me see what you're doing," and started oohing over my digital art. She leaned her head on my shoulder as she watched me work. She never moved it though...it was like she was a zombie. I could feel her body as she sat next to me...her pulse was very strong, almost too strong, like it was straining to work (IRL she died of a stroke...I don't know if that's relevant). She also wasn't tiny and frail as my mom always complained--"that woman was never over 100 pounds in her life!" She actually seemed more my size. I sort of pushed her head aside, partly because it was uncomfortable, partly because I didn't want her to die on me. Then I remember Stan talking about having to fix the stream in the attic. I wasn't sure what he meant...I asked him if the roof was leaking. He said no, it had nothing to do with a leaky roof, and expained it in supernatural terms, like the stream was coming from somewhere else...another place. As he went upstairs, I found this very strange passageway covered by a metal door that I was able to force a utensil under and lift up. I saw outside...it was an older, but very nice, middle-class neighborhood, nothing like the quasi-ghetto, low-income neighborhood my grandparents lived in. I thought since the time the house was sold after my grandmother died and my grandfather moved out to Colorado so that my dad could keep an eye on him back in 1972 or 1973, that the yuppies moved into the neighborhood for urban rehabilitation. IRL, it was a pretty neat old Victorian house...or so I remember when I was nine, just ripe for the revitalization movement in the Boston area around that time.

I guess it's so funny because it's all so serious. Like the Gal FAQs:

Q: Can I wear a Stadium Gal when I'm menstruating?
A: Not Recommended.

Duh! OK, someone who would have to ask a question like that should get a Darwin award.

OK, this one from the Pal FAQ:

Q: What happens if I have an erection?
A: The Stadium Pal Cathether is made of latex free material that will expand if that occurs.

Thank goodness. OK, now I'm not a man, but I find it hard to imagine being aroused while a bag of pee is strapped to your calf and a catheter is attached to your dingdong.

Thank you, David Sedaris...you kill me.

I just heard David Sedaris's bit about Stadium Pal on "This American Life" today. I never laughed so hard over anything I've heard on NPR. I guess there's even a Stadium Gal. While there, you must visit the Stadium Gallery...gawd.

Look what we found! 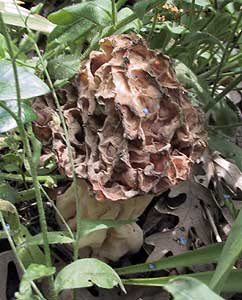 We were looking for some plants we planted in our garden earlier this year to see if they survived, and came across this beauty amidtst the growth. It was about six inches tall with a stem about two inches wide. It was a big honker. It's past its edibility stage, but that's ok as we're going to let it spore and make more! We found a very small one earlier this spring and were really surprised at that, but finding this one confirms that our garden definitely has the beginnings of a fungal infestation! How do I know it's a m*o*r*e*l and not just a random s*h*r*o*o*m? Well, first because of the way it looks, and second, because we bought some a few years ago, rinsed them off before we sauteed them in butter and herbs, and poured the rinsewater outside in an appropriate spot. They're now coming up in that area.

Stan almost didn't want me to post this on the internet as those who know of m*o*r*e*l areas like to keep them secret. So here's a disclaimer that will hopefully please him: If you're getting any unscrupulous ideas...I have a Boston Terrier who thinks he's a Pit Bull. And I WILL let him bite. 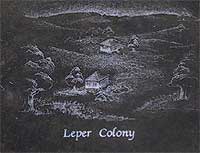