Roses Growing in the North

Today I saw a small black bird sitting above the place where the man died a few days ago. The bird looked at me and then flew directly over my head and to the west where it perched for a few moments. The small bird then flew to the north and disapeared out of sight.

The man's spirt has surely returned home and I feel better that he is no longer lingering where I live. The thoughts that remain with me are these:

It is a shame that he died in the company of false friends and companions who must be the sort of ignorant people who have no respect for the ill or the dead. I - myself - would prefer to live a solitary and lonely life in this world than to spend time in the company of people who pretend to be my friends and then leave me to die alone on a cold dark street.

The flower of the rose is considered by many to show an expression of true devotion and love. It is impossible to avoid the irony of someone dying on the branch of a rose bush and having been left there by people who apparently had no devotion or love for him.

I have thought about setting a flower out in the place where he died, but when he died his body was laying across the branches of a rose bush I planted many years ago. When I see these roses boom every summer from now on I will be reminded of this man. I hope he is has found better companions with true hearts in his new home.

You know what really pisses me off?

So-called "Web Standards" web designers who feel like they can pick apart me and my sites because I use tables (heaven forbid) and because they find one misspelling in my terms (by certain *other* web standards, one misspelling makes me a saint!) , but when you go to their sites, they're boring as hell, the pictures don't show up on certain browsers, hover links turn to a color which cannot be read, and well, their design is just plain pedestrian--like a business man in a grey suit--and their content is equally boring!

Actually, what these boring little code geeks remind me of is the old sexually-repressed PVAL duck painters Stan and I had to deal with back in Colorado. A bunch of old biddies and geezers who were hung up on the realist school of art, and anything expressionistic or abstract or NUDE they frowned upon as not being "good art." All they were obsessed with was getting the feathers of the duck just so, but in actuality, they weren't even good by realist standards! That's what these code geeks are like, getting the code "just so", but when you look at their designs and content you seizure into a yawning spasm! All their blogs talk about is the latest code for a certain blogging software, framed by white, grey, and maybe a splash of blue. They eschew anything expressionistic, anything with color, and the designs that they do approve of that do have color, know not how to USE color. Bright green bar here, orange background. And they call that good design. Oh please. It's simplistic and lame. And it takes a millisecond faster to load, which is good, right? Who cares?

OK, first of all, they won't design for MSIE 5 which is supposedly SOOOOOO outdated, yet, out of the other side of their mouth they're so interested in designing fast sites so that it'll be accessible to all people at varying internet speeds. Isn't this rather hypocritical? If they want to be inclusive, why don't they design for MSIE 5? If all they're concerned about is designing for the hip (not us lamers who use MSIE 5), then why be so concerned about speed since all the hip are also on high bandwidth? I say that they don't practice what they preach, and they're only designing whichever is convenient (it's convenient for their nerdy brains to make due without tables and load fast and screw it if it looks like crap in MSIE) but it's not convenient to design something that is actually visually interesting and outside of the norm of IBM (remember IBM from the 80s?) grey suit blue tie type sites.

That's what those sites are like...businessmen from the 80s. The whole corporate boring look. Oooh, put on a red tie/orange background. That'll show you're actually exciting.. Ooooh.

Look, I wouldn't have a problem with them if they didn't start attacking me for what I do with my designs, live and let live, I say, but once they cross that line, watch out.

They removed the police tape in the alley minutes ago. Stan was talking to a detective earlier, and he said that the scratches around the man's head were determined not to be from a fight or anything, but from our wild rose bushes that we have planted behind the garage. The guy dropped dead into our rose bushes! Pretty damn macabre. I think the Bauhaus song title in the subject of this post is very appropriate.

I'm watching the Olympics and men's beach volleyball is on. What's the deal with the tees and tank tops? I wanna see nice chests! Where are the speedos, what's this baggy short stuff? I mean if in women's beach volleyball the players can wear their skimpy little sports bras and tiny bottoms that ride up their butts, where's the equality for the men?

On a serious note, they ruled out homicide in the preliminary autopsy (see previous posts). I just bet it was an OD.

A shot Stan took facing north showing the weird maze of yellow police tape. Our garage is pale yellow with terra cotta trim. If you look closely between the two vans, you'll see me. 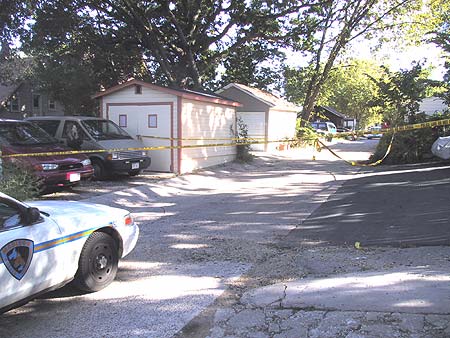 Looking across the alley from our driveway towards the south showing police car, police tape, tip of our red van and neighbor's house. They said if we needed to leave in one of our cars, they'd let us. 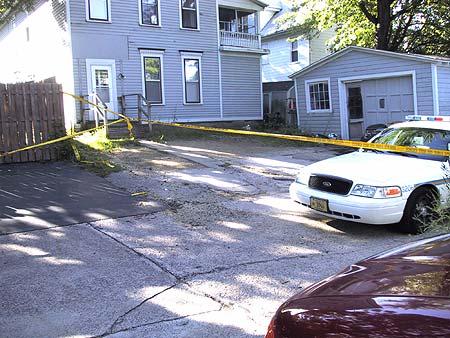 So this dream sort of came true

They weren't wearing haz mat suits, and there wasn't a weird duct thing, but police descended on our yard and general neighborhood with flashlights looking for something. Turns out there was a body in our alley behind our house. I had heard noises earlier...just loud talking, stupid people talk, you know? Someone called the cops, but I don't know who. I gave reports of what I heard/saw to two policemen. The TV news at night said they were shot, but the last policeman/detective I talked to said that report was premature and they don't know the full details yet. I looked out the window upstairs and heard a policeman saying, "I'm in the alley where the body was found but we don't know whether the crime occurred here or whether the body was dropped off here," or something to that effect.

I won't be getting much sleep tonight.

That dream was Sooooooo similar in every way to what actually happened, except for the hazmat suits and the duct thing. Oh, and we didn't have to evacuate our house.

Ironically, Stan took a few days off this week and next so he can catch up on some work at home. If he had to go to work, he'd have to call in because our cars, which are parked in our parking lot in the alley, are behind police tape. I hope we don't have to go anywhere tomorrow. Fortunately, Jennifer Market is in walking distance, as is a stupid little post office. Who knows how long this crime scene will last.