I was looking through a closet which looked much more like the closet in the bedroom at my parent's house rather than my closet where I live. I discovered a bunch of tank tops and short sleeve shirts that I'd forgotten about, much to my surprise. I put one on and then went off into another part of the dream. I was out for a midday snack with...get this...Woody Allen and Diane Keaton (circa mid-70s). We were at some fancy restaurant that served ice cream sundaes and lighter faire like salads. I was looking at the menu, which was more like a colour catalogue because there were full color photos of the sundaes. Then it was as if the sundaes came to life, and they were on our table. We could eat any and all of any sundae! The really fancy sundaes were nicknamed "Orgasms" and Diane said she usually gets "Orgasm #2." I decided I'd have Orgasm #2 as well, but I also was eating some of the toppings off another sundae. These toppings were weird...they were these flower pistils that were extremely long (like an incense stick) and had a thing on the end that looked like the inner meat of a pecan. They were rather spicy...I munched quite a few of them. Then, well, I suppose this goes hand and hand with "Orgasm #2", Woody starts engaging in foreplay with me...but he's not very good. I'm not excited. Eventually the dream comes to a close. Cut.

And here's a really addictive guessing game: http://q.20q.net/q.cgi It's an artificial intelligence 20 questions game. Pretty amazing. (You don't have to register to play, you can play anonymously) 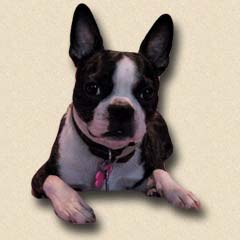 Mr. Bun-bun head is 7 today. And I forgot to wish our cat Persephone a happy 12th last Sunday.

I was at my parent's house and they were getting ready ready to sit down at the table for a game of cards with Stan and I (just shoot me now!). I was busy looking for something, walking around their house. Stan was sitting down at the table with some magazine or calendar with pictures of people. It was sort of like a yearbook, too, and I think there were pictures of Stan as a kid. He was going on about how he used to have more hair when he was a kid, and I was trying to reassure him that I liked his hair now. I think there were pictures of Roger Waters in the magazine/book/calendar thing Stan had. I said something in regard to polyester, like I had to remember to bring it to the table, and then I corrected myself and said laughing "oops, wrong Waters" (as part of my ongoing internal debate of Roger Waters vs. John Waters view on the humanities and popular culture). I was going on about polyester (the fabric, not the movie) and that my dad wouldn't forget it because he'd be wearing it. (I know...this makes no sense, does it?) Then as I was looking at this magazine/book/calendar that Stan had, he suddenly takes it and puts it under the table and tells me I can't see it. I didn't understand why, so I reach over trying to get a glimpse of whatever it was he didn't want me to see. Then my mom starts to peer over at what Stan is looking at too, which makes me really mad because my mom is quite snoopy and I didn't want her to see something that might really offend her, and well, it really wasn't her business anyway, so I get sort of laughably mad at Stan and say, "See, now look what you've done, you've got my mom trying to see it now too!" Then I grab Stan's calendar/book/magazine and there's some pictures of actresses, but the only one I can remember is--get this--Zsa Zsa Gabor. I'm absolutely cracking up and I'm asking Stan, "you're trying to hide a picture of Zsa Zsa Gabor from me?" It was so funny, and Stan had the most embarrassed George Costanza-like expression. I woke up laughing and woke Stan up in the process too.

I remembered more of my DREAM last night...

I just remembered I was holding a guitar, but it was like a fake guitar...it was painted all dark red. I was pretending to play it, and just happened to make sounds like David Gilmour would make (that note bending thing). I couldn't believe I could do that.

I was travelling with my mom, like when I was kid. We were in a cab and it was driving into a parking garage. There was a man staring at me. My mom and I get out and go into a hotel lobby. It was an extremely posh hotel...no Red Roof Inn this time. I found it odd that my mom, wife of the world's biggest skinflint, would want to stay in something that fancy. She said something however, that showed ignorance and naievete on her part, although I cannot remember what it was. I was trying to get her to be quiet. I also remember seeing a whole bunch of hotels...they were huge, massive structures with millions of windows; the guests must have been packed in like sardines.

Of all days to come down with the stomach flu...

I was going to buy a copy of the Dark Side of the Moon DVD. I can't. I have to stay home because I need to be near a bathroom at all times. What timing. This sucks.

When I went to the hotel yesterday, I forgot to pack a bottled water. I had to drink hotel water. I couldn't go out and get anything because the dogs would bark and didn't want to get found out because you're not supposed to leave them alone (according to the hotel rules) I'm sure it didn't help, but I don't think drinking the tapwater caused it because I could feel myself getting sick when I first went there. It just got progressively worse throughout the day is all. Stan blames it on stress. I don't think stress could cause this much harm. I mean, I've had stress with this whole plumbing project, but in the past, I've endured MAJOR STRESS and this episode was nothing compared to some other really stomach-churning incidents which made me lose my appetite and vomit, but nothing like this.

But at least we have lead-free pipes at home, for what it's worth.

I didn't get a damn thing done at the motel. I tried to get some sleep, which was sorely lacking, but I couldn't sleep much as the bed was small and of course, both dogs HAD to be on it. I was planning on doing a lot of stuff on my iBook once I got there, and if not that, a lot of reading. I didn't do anything except lie in bed, watch CNN and go to the bathroom. And of course I'm not getting much done today. It's hard just to type this when you know any minute you'll have to make a run...

I was speaking to some woman whose left arm, near her wrist, had a big chunk taken out of it. She said she accidentally did it to herself, somehow, probably in a food preparation accident. It looked awful, like braunschweiger. I wanted to tell her that she needed to see a doctor immediately, (I was really afraid she was going to lose her arm!) but at the same time, she was intelligent, and I figured she knew what she was doing as far as home care went.

I think I know where this dream stemmed from. Yesterday, Stan and I were removing our cats from Tim's place (I'll probably write about my day yesterday later) and they were both scared, especially Caligula. I picked Caligula up to put him in his carrier, but he clawed my arm. The claw marks weren't that bad or deep, but I am allergic to cats...more allergic than Stan, even, and after awhile the claw marks swelled up a LOT...like bad mosquito bites. After it initially happened (the clawing, not the swelling) I made a joke "I tried to kill myself with a cat" because the claw marks looked like a feeble suicide attempt, but as the night wore on and they swelled, it became not so funny. I mean, I was having one severe allergic reaction. But as Stan said, we can handle these reactions better as we age, so I'm sure I have nothing to worry about. But as I look at my arm now, it is still swollen. It is even larger than my right arm, which should be larger normally because I am right-handed. Hmmm. I know a doctor would tell me I shouldn't have cats if they ever knew. Guess I won't be taking that patch test after all.

I can't remember this dream too well, but I was with Stan and Tim (I think) and for some reason Roger Waters was sitting on a park bench with some other people (this is the second time I remember dreaming that Roger was on a park bench...what's up with THAT?) and I told Stan and Tim that I wanted to meet him. For some reason, they were able to arrange it so that when they sat down on the park bench, I would end up sitting next to him. I mean, that sounds so utterly...jr. high school or something, doesn't it? The dream keeps repeating itself like Groundhog Day but each time I end up saying a little more to Roger, but I can't remember much more than that. He looked fairly similar to the way he did in the In The Flesh DVD (which we watched part of last night).

Also, another part of the dream...I was sitting down at a table with a bunch of people, like an art opening. A woman (maybe a decade older than me? It's hard to tell) comes up to me and puts her hands on my cheeks and says my name. I thought I recognized her, but then I realized I didn't know who she was. I figured she was either another artist or art patron or something. Weird.