As promised, a photo from a few weeks ago of the Stapelia in bloom. 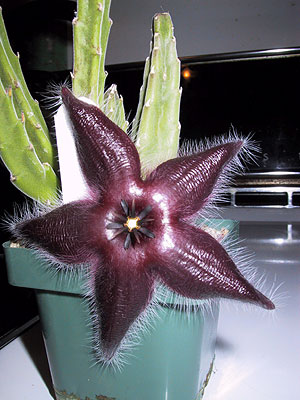 A year ago today Stan and I visited the Rock and Roll Hall of Fame. I wish I had known more of what to look for when I went regarding Pink Floyd. I was looking, but I'm sure I missed things. I'd know more now of what to keep an eye out for.

I wish I knew more a year ago about keeping alive my Ariocarpus cactus. I managed to kill it this summer, after I'd had it since I was a young teenager....13? 14? Hell, I didn't even KNOW it was an Ariocarpus when I had it. I didn't even know it was so rare, or that it really needed much more sun, to be put outside to revive it. So I just let it die...it seemed unhappy. I wish I could go back and save it.

It's really sad to realize you once had something so precious, and you let it slip away, not knowing that what you had means so much. Maybe some day I can find another Ariocarpus. It's happened with other things, it can happen with cactii.

Something that I've noticed lately that Stan agrees with: People 30 years older than we are are the same as they were 30 years ago. What I mean by this is 70 year old people nowadays are no different than 70 year old people were back in the 70s. One would think that they'd be hipper. Or just somehow "different". It's a different generation, after all. OK, I must admit that my mom is different than my grandmother. But I'm not talking about *my* family. My family has always been "different." My grandmother, being an immigrant, was naturally going to seem more "old world" than her daughter. And my mother, beign a daughter of an immigrant, is going to seem more old fashioned than me, a 2nd generation American. I'm not talking about my family. I'm talking about other people. Americanized Elderly Americans. They've not changed. I calculate, therefore, that in another 30 years, by the time I'm 70, other 70 year olds will seem the same as they are today, and as 70 year olds were in the 70s.

It's one thing to feel alienated when you're young. You chalk it up to being young. But by the time you're middle-aged, you realize that there's something else at work. I refuse to follow the same path that everyone else is. I'm not going to be one of those old people in the Comfort Inn sitting in the lobby in the morning, watching some bad Good Morning network TV show, staring at all the other guests as they are leaving with their luggage, sizing them up and down, scrooooooootinizing. I'm going to be the scrutinized, not the scrutinizer. I'm going to be the person leaving the lobby, eating my "continental breakfast" (read: donut) in my room, not out in the lobby with the others.

I'm not going to look my age either. I figured it out...what makes one look old and what makes one retain their young looks. I only have two things that will cause me to look older and that's because I am white (whites wrinkle more) and short. It's better to be tall when you're old because when you're short you will look more like a shrunken thing. But then again, tall people have more back problems, so I guess it's a wash. And the white thing...I'll look better than most whites because I'm really not wrinkling that much for a white person.

What I also have in my favor as far as physical features: Big nose. It's better to have a big nose when you're older as when your face starts to shrivel, if you have a small nose, you'll look really strange. I'm not really fat, not really skinny. Sort of in the middle. Then I don't look either obese and gross or shrivelled and frail. Long face helps too. Small, round face (especially if you have no chin) really makes you look older when you're old. Long hair. I'll probably not keep my hair as long as it is now when I'm 70, but I'm not getting an old lady cut either. No way. And I'll keep wearing jeans and black. That'll keep me looking young. And that's just the physical features...no need to mention the mental qualities that keep one young.

There's this one stupid ad on tv (I don't even know what it's for...it's so awful...probably some canned orange juice drink or something) where a mother is complaining that her kids taste in music is awful. This mother is probably around my age. Then it shows the music the mother is listening too, and that as well is just as awful, although different than the kids' music. The mother's music is like...old person easy listening or something. I mean herein lies the alienation. Shouldn't I relate to the mother who is my age? Should I also share not only her contempt for her kids' music (which I do), but also her appreciation of "her" music, which I don't? It's like an entire generation (my generation) of musical appreciation is missing from that ad. The mother isn't listening to the music she grew up with...she's listening to her parent's music! This is what is supposed to happen. Once you get to be middle aged, you're supposed to forget all those passions of your youth and revert to the model of what your parents were like. That's why 70 year old people seem the same as 70 year old people were 30 years ago.

It's like culture is stuck in a loop and it can't get beyond it. Groundhog day, or more like, Groundhog generation.