And here’s another one…we’re at about 2:21 on the right side of the screen. Very quick…we’re hardly even there.

Our yellow McWalker sign first appears in the scene around 2:10 way in the back on the left. We’re walking behind Groucho and Harpo (another Fitzwalkerstan/Marx Bros. reference!). Very short again, don’t blink.

Earlier this past week the weather got really hot and Augusty. So what does it decide to do for Saturday when Day 90 of the Wisconsin Union Fight protest is happening?
END_OF_DOCUMENT_TOKEN_TO_BE_REPLACED

I’m underneath the wagging finger of shame…sign post and human blocking my face, but you can see some of my psychedellic Warhol poster. This photo was taken Saturday, March 26. END_OF_DOCUMENT_TOKEN_TO_BE_REPLACED

Please click the thumbnails below for the full image and a bit of explanation. Those images can be enlarged a couple times as well for the full effect.

Here’s another one with us…very small in the background. This video was taken yesterday
END_OF_DOCUMENT_TOKEN_TO_BE_REPLACED

I found a picture on Flicker that was taken at the protest two weeks ago, Saturday March 12, when we were carrying the punk rock anti-Walker signs.
END_OF_DOCUMENT_TOKEN_TO_BE_REPLACED

During future rallies on the square…
END_OF_DOCUMENT_TOKEN_TO_BE_REPLACED

I don’t have a smart phone or an ipod or even a small camera I could take with me to the protests–something like that is beyond my budget, so that is why there are no pictures of the Madison crowds here. All I have is one camera I use for my business–photographing my jewelry, art, beads, Stan’s cactuses, etc., and I’m not big on bringing that to these events. So since I had to get out my camera to shoot some beads this AM, I decided to shoot some of the posters I made that we’ve been bringing these past weeks.

On Saturday, March 12, I carried this one: 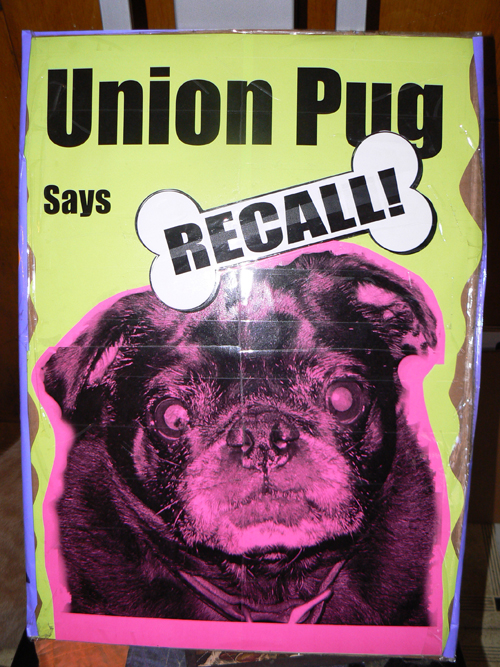 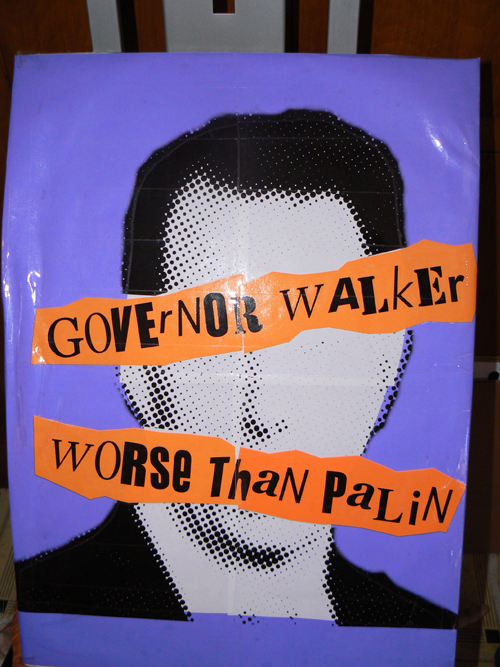 and Stan carried this one: 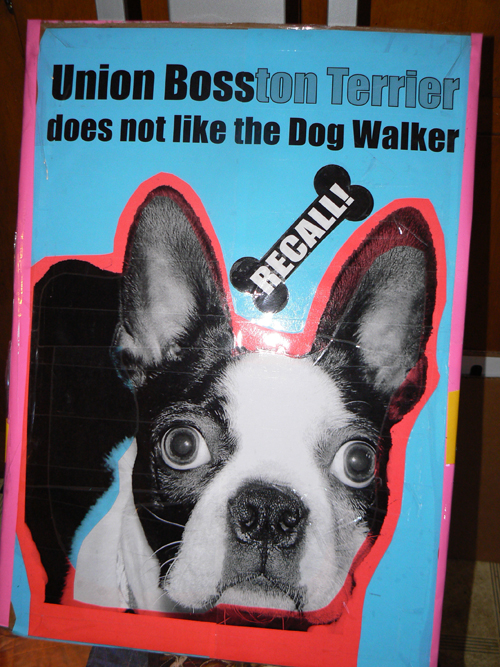 These are made with black-cartridge laserwriter prints on colored cut paper over cardboard. They’re approx. 16×20 inches.

On Saturday, February 26, I carried this one: 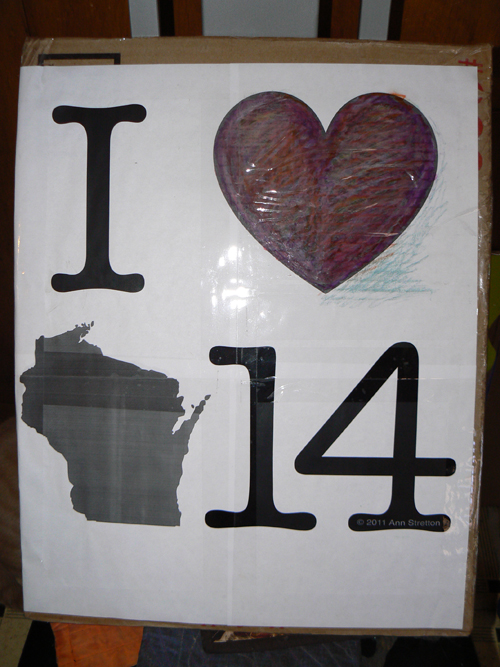 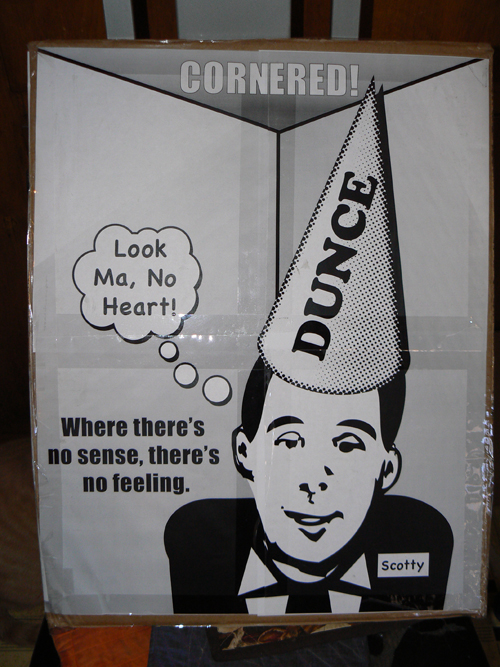 I sort of had a Scott Walker-moment when I was creating that one because I put the flipside on upside down, so I couldn’t hold the sign up in the air, just against my body to hide the upside down side. I had gotten up really early in the morning, and brain wasn’t engaged fully when assembling it.

I also made another sign, but we left it in the car (we took it on a weekday afternoon) and Stan’s at work right now. I’ll try to shoot it sometime.

Proudly display your “Wisconsin Palm Tree” and show your support for the workers, unions and all of those fighting against Governor Walker’s Budget and the trickery and lies of the right-wing.

My “Wisconsin Palm Tree” (Latin name: Foxnews liesatus) comes in a variety of 4 different colors: Red, Green, Blue and Rainbow. No words or slogans this time, just a palm casting its shadow over our lovely northern state. You can wear them proudly at your protests as they come on a wide variety of clothing, or you can also get them on stickers, magnets, pins, mugs, steins…even ipodcases. I’m also working on adding them to other items like necklaces. They’ll be ready soon…

It’s bad enough with some extreme right-wingers calling us “Union Thugs,” but now Wisconsin State Senator Glenn Grothman has called the protesters “slobs*.” OK, so take back these words! I’ve designed merchandise like buttons, magnets, stickers, mugs, clothing, etc. to wear and use proudly while protesting, at home, or on your job. (It doesn’t have to be a union job, either…people of all kinds of employment are supporting our efforts to stop the bill.)

I Heart My “Union Thug” by Ann Stretton

I Heart My “Protesting Slob” by Ann Stretton

See the complete line of my “I Heart…” merchandise at my store.

*He stated this on “The Last Word” with Lawrence O’Donnell on 3/1/11. I saw it. I have also been to the protests on 3 different occasions so far within the last week. There are no slobs. People pick up after themselves. Grothman also said it smelled in the Capitol. I was in the Capitol Building on Friday 2/25/11. It did not smell. In fact, I was surprised how good it did smell. Trust me. I’m really sensitive to stinky things. And the only thing that smells here are the Republican’s antics.

Excellent Pictures of the Wisconsin Protests at The DailyKos

Maybe not in those photos, but we’re that crowd of humanity.

Favorite sign in that collection is: “I don’t believe in the tooth fairy, the easter bunny, or Walker’s Silent Majority.

Slogan of the Day: “If you wanted a Republican to care about you, you should have stayed a fetus.” (Found over at HuffPost in the comment section on an article about the Wisconsin situation)

Damn, I just realized I had one of those horrible dreams last night about not having graduated from graduate school. I dreamt I still had a couple semesters worth of credits to take. And I decided at this point it wasn’t worth it. Ew. I must have accidentally gotten into Scotty’s little brain (claustrophobic!) and was recalling how I never finished college because “I already had a job.” Yes, because we go to university to get jobs, not to get an education. Right. Typical lack of curiosity about the world, just like Sarah Palin. Actually, I really wish Walker would be MORE like Sarah Palin…like as in QUITTING the Governorship. Considering he quit college, he certainly has the QUIT gene.

You know what is driving me crazy is that there are reports that there are protesters on the square numbering in the tens of thousands, and these Repugnicans are saying–and I paraphrase–“Yes, but how many people live in Wisconsin? Certainly it’s just a small minority…” What the BLOODY HELL? If all the people who were against Walker’s bill descended upon the Capitol, 1) It would be ABSOLUTE COMPLETE CHAOS, and 2) The Repugs would then say “Irresponsible…they should be at work!” It’s double jeopardy. Regardless of what you do, Repugs will find a way to spin it their way.

Oh, and Repugs are angry because outlying Wisconsin cities are bussing people in to Madison to protest, like that’s not fair or something? WTF? What, you want them to all drive down in individual cars? Yeah, that’s probably what they want…Repugs do like exhausting the fuel supply.

Stan did go to the square shortly yesterday. I had to stay home…I’m still in a lot of pain, and though I’m feeling somewhat better today than yesterday, the pain on my right side is pretty bad. I also discovered a big black and blue mark on my hipbone. I didn’t realize I even fell on my hipbone…I didn’t even realize I still had hipbones. Heh. Stan’s bus passes were expired…when he’s worked at the courthouse, he’s had to leave in the AM before the busses were running…or he’s biked in warm weather, so the passes were over a year old or so. The bus driver let him ride anyway, but without passes he had to walk home, so he didn’t stay too long. I’d like to go tomorrow if I’m not in so much pain, but we’ll see. The protests will not stop unless public union members retain collective bargaining.

There’s this rather hidden neighborhood on the west side called “Radio Park.” I have no idea why it is named that…a web search brings up nothing about its history. But it has some of the coolest mid-century modern houses I’ve ever seen. Radio Park is entirely made up of Wright-inspired high-quality custom-built split-level types of houses. Each one is unique…no tract housing here. I would say they were built in the early 1960s. I would give anything to live in one of these homes…if I had half a million.

Click the map below for a larger view. The area is basically encompassed by Plymouth Circle with Larkin St. on the east. Priscilla Lane splits it down the middle. Take the little yellow Google Map Guy and plop him down for a street level view. Unfortunately, Google shot this during a typical lush summer, which makes the houses a little hard to see.