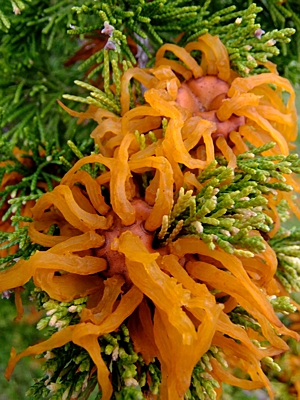 Wow, this stuff is strange and beautiful. I was taking a walk for part of my break time at work a few days ago and walked by a pine shrub like fitzer tree with these great pine cone structures on them. It looked like they were in bloom, but they were sort of slimy. I’ve never been a fan of pine trees and especially not caring for fitzer types. That is if I had space to plant trees I like pines and fitzer like plants would be my lowest priority for my tree collection.

Seeing these beautiful orange things on a fitzer tree made me think that I wanted to grow something beautiful like this.

I took Ann back to the location to see these wild things, but they were dried up and not so beautiful any longer. She looked up these things on the web and they are actually a fungus and not flowers or pine cones. It is exciting to learn that a fungus can be so beautiful.

Oh man, why didn’t I get THIS case? I’d be willing to risk screwing up my business just to be on that jury. Damn.

Well, not really. But it would have been funny.

The introduction has two layers before beginning the dialogue between Socrates and Theaetetus.

In the first layer Terpsion finds Euclides after Euclides has departed from Theaetetus who is dying from severe war wounds and dysentery. They walk to the home of Euclides where he has his servant read the discourse between Socrates and Theaetetus for them while they rest. The whole thing is written by Plato, but inside the story of the dialogue it is Euclides who wrote the notes which Euclides and Terpsion are listening to as the main dialogue read by a servant within the context of resting at the home of Euclides.
END_OF_DOCUMENT_TOKEN_TO_BE_REPLACED

Mom called me at about crazy:thirty in the morning because she wanted to let me know she was coming over to look through the kitchen to see if she could find something she needed for making dinner today that she forgot to take with her in the move. Seriously? I mean just come over, don’t call me. I would not have heard her fummaging around in the kitchen at that hour in the morning probably anyway, and even if I did it wouldn’t be like a big freakout thing “oh no, there’s a stranger in my house.” I’d know it was her most likely looking for something. But calling my cell first? That’s nuts. And so very un-country-style where people just drop in, which I hate actually. I don’t know where she learned her big city “I’ll call first” ettiquette. But then again, they’re not typical farm folk either.

Yeah, it’s going on almost fourty years now since Dad became a veg, and he’s never budged for one minute to eat a bit of the bird on the big Tday. Last year we had salmon, and he does eat fish. But this year we’re back to the silly traditional overstuffed large fake hormone-injected factory-created bird feast feeding overstuffed football brainwashed zombies, except for Dad, who’ll have to make due with the sides.

And there’s going to be a lot of it left over. They anticipated more of the family coming over, especially in celebration of their new place, but it looks like it’s just going to be me, them, and, unfortunately, Marla and a few of her redneck co-conspirators. Lamar, Nina and the kids are going up to Manitou to be with her family because her grandmother is like 100 and they don’t know how much longer she’ll be around. Melanie is working today, and afterward she’ll go to Denver where Trish will be with her family. So it looks like the rational part of the family in attendance will be outnumbered again.

Yup, this is going to be fantastic, I can tell already. Off to a good start. I’m taking my laptop with me so I won’t forget to document any insanity that comes my way.

Here we go. They have arrived. Marla, redneck spouse, and Kyle the boy wonder. Looks like her other kids are not coming. Now, this may be a pretty good match-up: The Paynes vs. The Stokes. Good times.

Ten o’clock is too early to start watching football. It’s just not right. I’m listening to Marla’s redneck husband hurling insults at the Packers and calling them a commie team (Ann should love that one). Of course Detroit is favored in his mind because he’s such a big motorsports nut. You wouldn’t want to be caught dead in a non-Detroit-made car around his way. Why yes, I do drive a Japanese car. But that’s ok, I’m dead to him anyway, thankfully.

He asks me what I’m doing. Yes, I had anticipated that, and have set up a bunch of tabs in Firefox with various football links so it looks like I’m checking sports stats and shit, just in case he looks over at my screen.

No, Marla, jello is not a substitute for a vegetable, you fool. And Dad will not eat it. Just because it is called a “jello salad” does not mean it is salad like in any form. You are stupid, Marla.

Dinner’s over, turkey was dry, but Mom cooked it forever. Dad wasn’t missing anything. Now it’s more football. Football Marathon. And more football. No one really gives a rat’s ass about football except The Redneck. Dad just watches it out of habit. I don’t think he’s really engaged.

More football. More homosexual slurs being hurled at San Francisco. What an idiot. You know what is really funny? He doesn’t know where Balitmore is! Priceless. He really is a total moron. He thought it was in the midwest. It’s a shame he fathered five children. Too much stupid going into the human gene pool.

This is whole day is stupid. I’m going back to my place. I’ve had enough. The cat needs fed.

It appears that I can post to my blog from the WordPress App, but I can’t do any fancy stuff, like add my avatar.

Also, you’re supposed to be able to take a picture, and then post it, but that doesn’t work. I’m not going to mess with it…I like typing on my laptop better anyway.

I don’t know how we got on this subject, but I was talking to my mom the other day and she started telling me about how she and dad would give us kids nicknames before we were born, before she knew our genders. It’s sort of like when software companies are working on a new release of software, or when film directors are working on a movie, before they know what they’re going to officially call it, like a codename.

I had a codename. This is so embarrassing but kind of funny at the same time.

My codename was “Harvest.” Isn’t that awful? I was named after the season they were expecting me to be born in. Good thing the name didn’t stick and I only had it for a few months before I was conscious.

Olsen was “Solstice.” Marla was “Independence.” Melanie was “Mayfly” and Lamar was “Windy.” I’ll have to give the guy a hard time about that. His codename is worse than mine.

I dreamt I had a job like the one I had at Stinko’s a long ago, except I got promoted to some sort of managerial position. The weird thing was it was more like a restaurant. I was trying to find something to do behind the counter, and decided to start decorating.

OK, whose dream is this?

Anyway, I wanted someone to fix me a meal there, and I had to order it on some kind of cross between a smart phone and a handheld calculator.

Later, I was sitting down and discussing fashion colors with a bunch of women.

Words like “aqua” “turquoise” and “chartreuse” came up a lot. Are those in this season?

The night before last I had a dream that my dad was in the hospital, but instead of being an 80 year old man, he looked like an achondroplasia dwarf of about half his age. Weird.

I know there was more to both dreams, but I can’t remember now.

Stan installed shelving upstairs and is going to buy some fluorescent lighting so that we can overwinter our coleus. I’ll put the babies (cuttings I took) nearest the light, followed by the adult plants that don’t seem to be making it in the cutting stage, followed by ones I like the best, on down the line to the ones that I appear to have duplicates of, which can perish.
END_OF_DOCUMENT_TOKEN_TO_BE_REPLACED This is similar to my other “Kong” coleus, but a little more pastel and and more white, actually creating more variety in the color…green, brown, magenta, pink, white. END_OF_DOCUMENT_TOKEN_TO_BE_REPLACED This cactus is amazingly uniform in leaf pattern considering all the colors involved. Most coleus tend to have more sporting and variation with the leaves. It almost doesn’t look like a coleus because of the uniformity, but it is. It is for this reason that this really isn’t my favorite of my lot this year…don’t hate me for that, ok? I still love it; the colors are beautiful.

Stem and petioles are magenta, leaf is yellow with green and a magenta wash in the center. Had a hard time with this one…overexposed. The actual color is so weird…it’s like the darkest purple blue, coating a base green, so it actually looks blackish in daylight.

Closeup inside might show a little better color accuracy. END_OF_DOCUMENT_TOKEN_TO_BE_REPLACED I think every color of the rainbow is included in this unique scallop edged coleus…red, orange, yellow, green, purple…amazing! END_OF_DOCUMENT_TOKEN_TO_BE_REPLACED Again, I had a little overexposure problem. This time the closeup (inside) is less accurate with the color and this overview shows it a little better. This one is similar to the black and blue one, except it’s more red. I almost thought I got duplicate plants when I brought one of them home, but I’m sure they’re different cultivars. END_OF_DOCUMENT_TOKEN_TO_BE_REPLACED