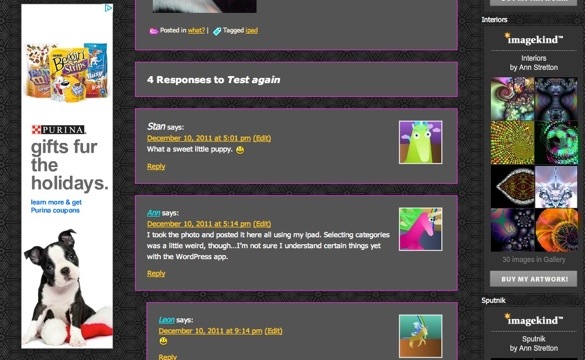 In all fairness, I think all this noise about how Mitt Romney is “weird” is really misguided. Slick? Yes. Mannequin stuffed shirt? Definitely. Against the best interest of the country? Absolutely. But weird? If you think Romney is weird, I feel sorry for you. You have led a sheltered life.

I am thinking that the people behind the weird campaign are young, probably Xers, maybe with Boomer parents. What they are perceiving as weird is nothing more than an old fogey’s ill-fated attempt at humor. Stan and I were discussing this today, and we were saying that his various lightheartedness caught on camera, i.e.: “Who Let the Dogs Out,” “Jukebox Butt Pinch,” and “I, Too, am Unemployed,” is just an older generation’s sense of humor. We’ve been around it. A lot. It’s not weird. In fact, it’s so lame and milquetoast it’s totally lacking of any edginess, and I would think “weird” would definitely have a little edge. It’s just dumb, not weird. It’s old fart humor.

Now you want weird? Take a look at the people Rick Perry had at his prayer breakfast. That’s beyond weird. That’s bloody frightening.

I dreamt I was at the doctor’s and they needed to test me for cancer of the feet. I had just had a regular medical exam, and the Doctor/LPN handed me a prescription, but I noticed it was only for 8 months. I told her about it, and she “oopsed” and changed it. Another woman was with her, probably a nurse, and she gave me this strange stuff in a tube packet (like when you get duck sauce at Chinese takeout) and some crackers. She said to put it on crackers and eat it.
END_OF_DOCUMENT_TOKEN_TO_BE_REPLACED